How can we help you today?

Prior to starting the installation please eject any loaded Filament. and unplug the Power and LAN cable (if used)

Stand the RoboxPro on a table with the left reel side of the unit facing you. 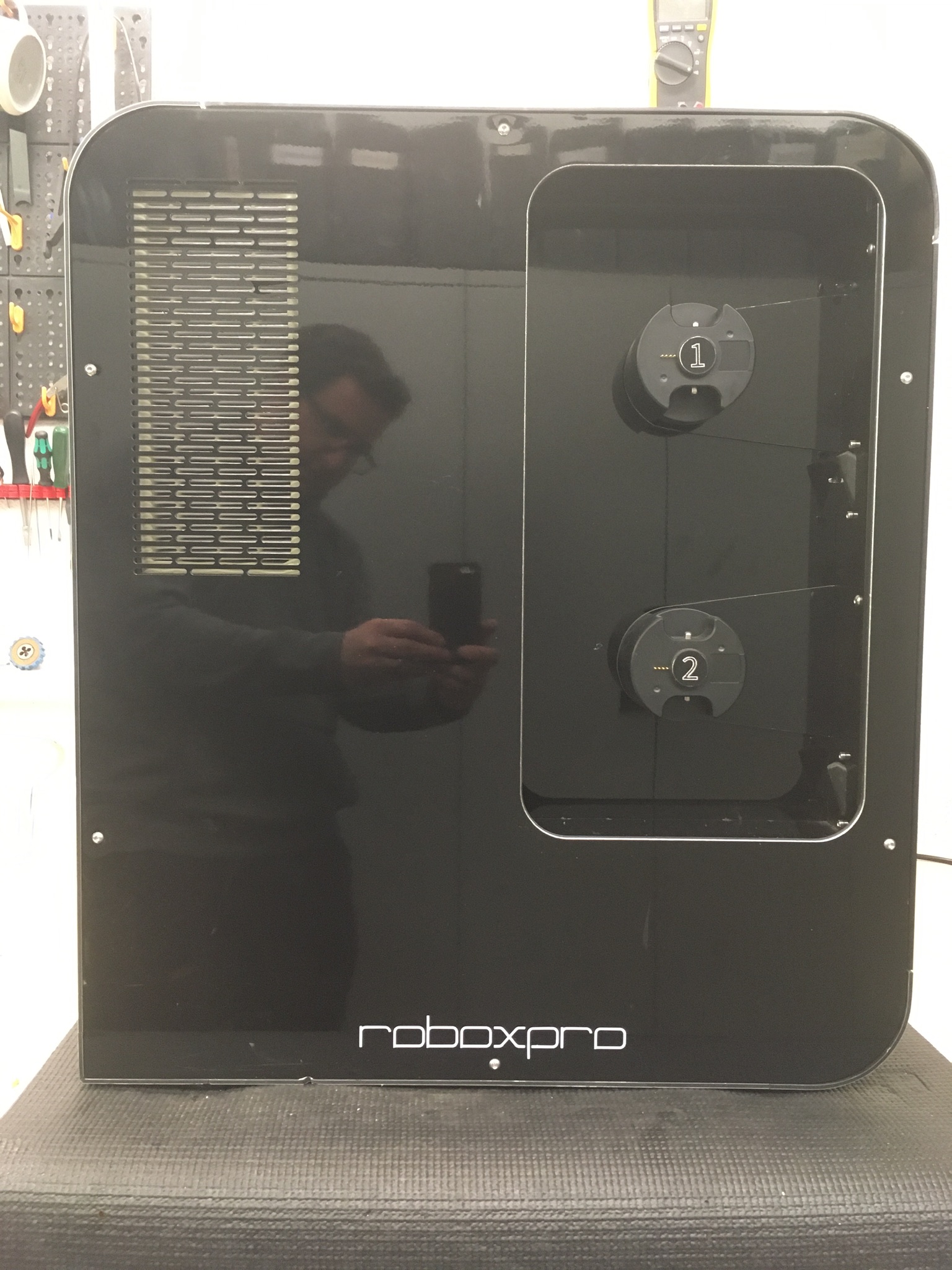 Remove the 6 screws around the panel to remove and gain access to the electronics bay. 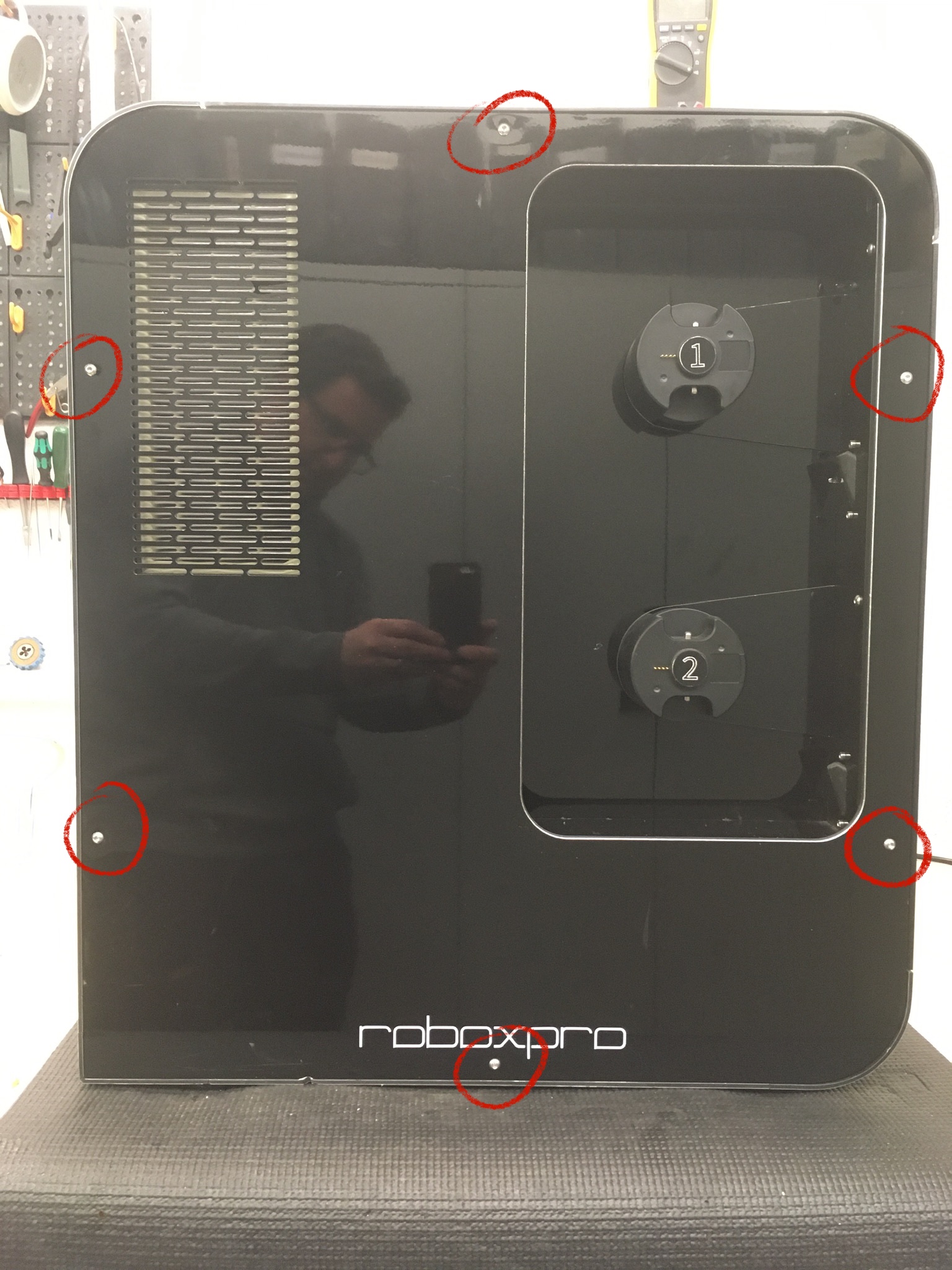 Unsolder the earth wires from the left side of the mainboard. 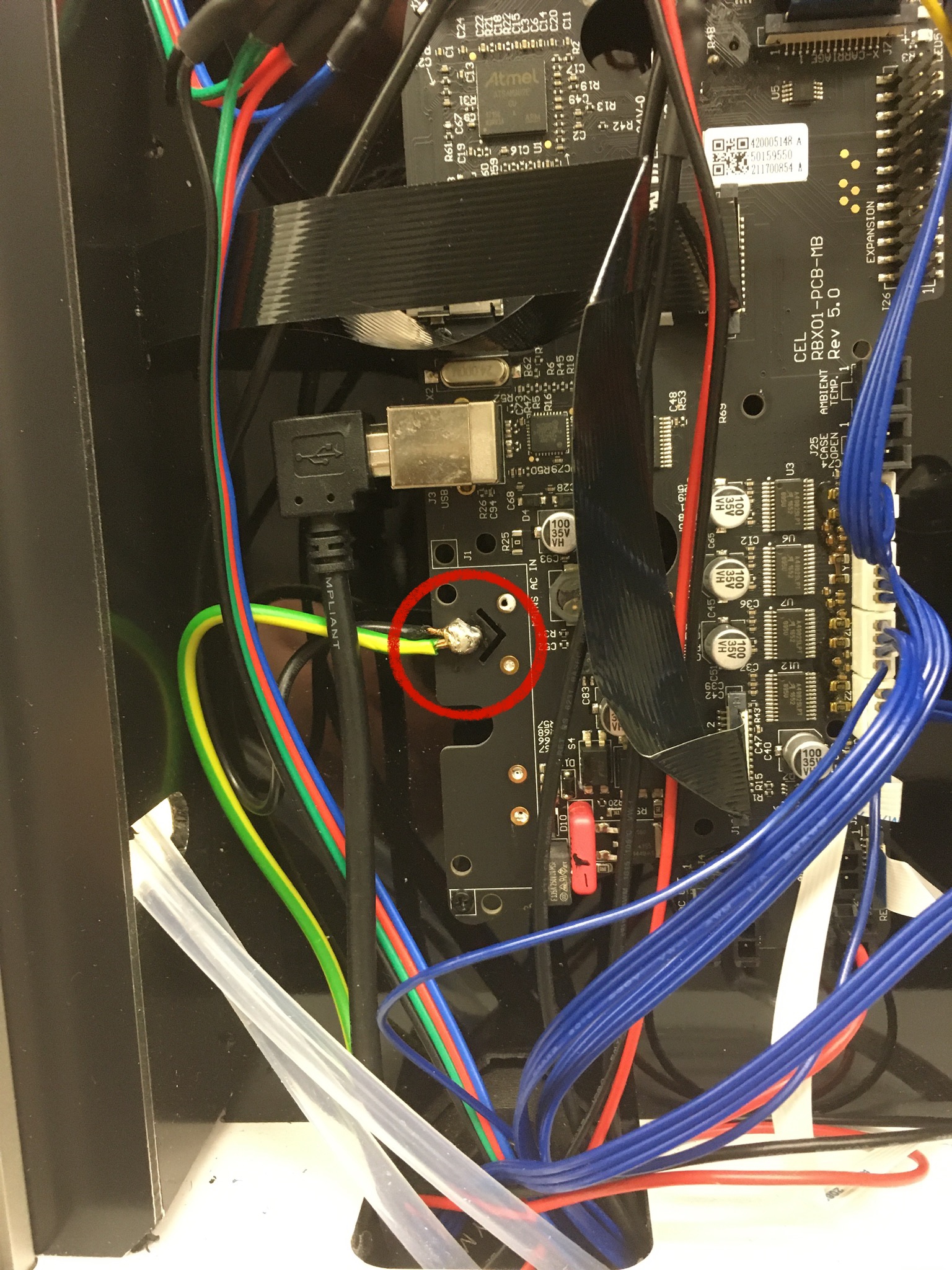 Unfasten the extruder ZIF cables from the board, the fastener has a black bar with a tab at both ends, lever up on both tabs, the bar will lift but not detach, this should then allow the ribbon cable to be removed. The ZIF cable contacts are extremely fragile so make sure to check that none are damaged on removal/refitting. 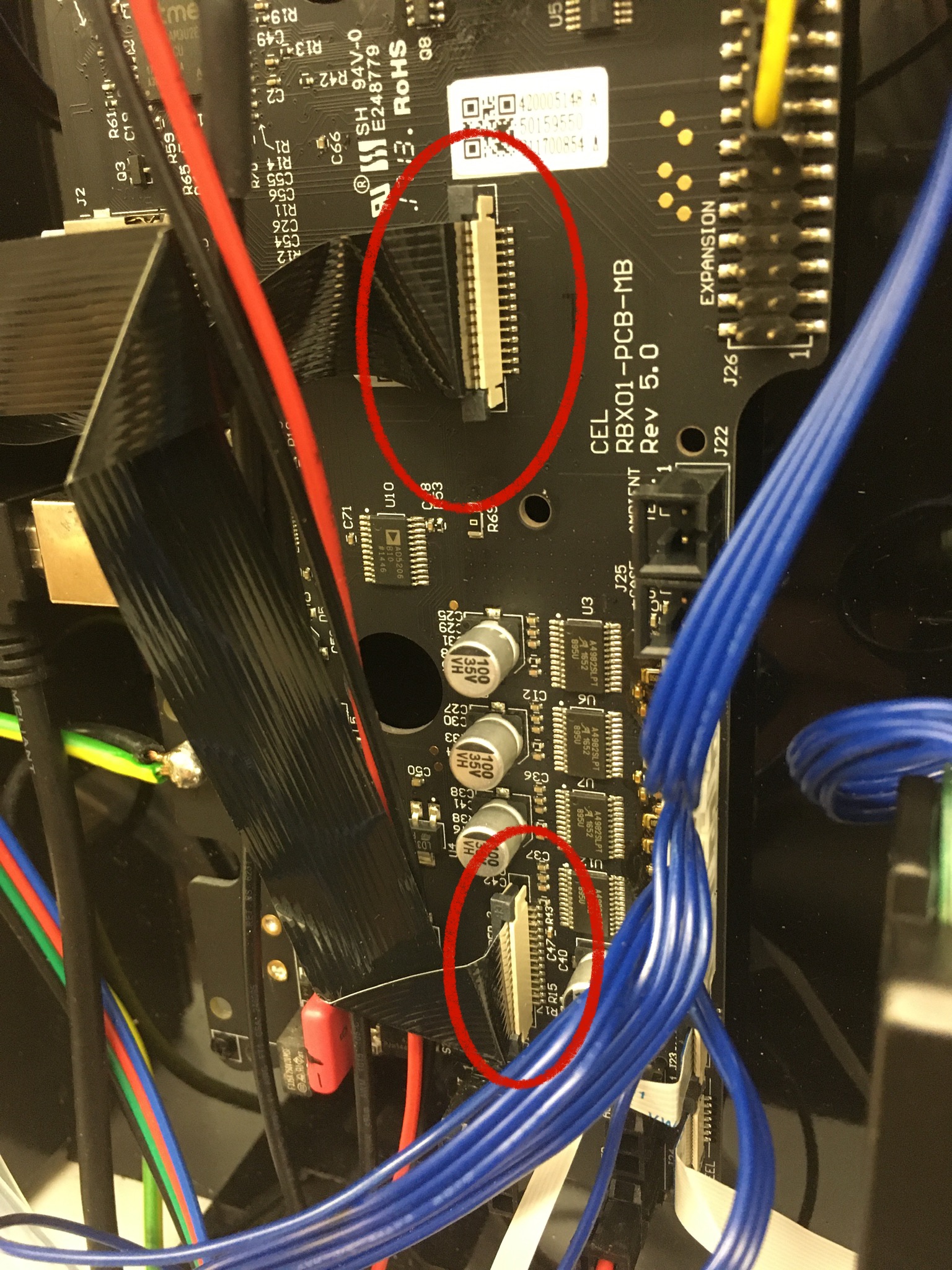 The X-carriage ZIF is the same as the extruder connectors, lever the tabs at both sides to free the cable then pull through the slot in the board. 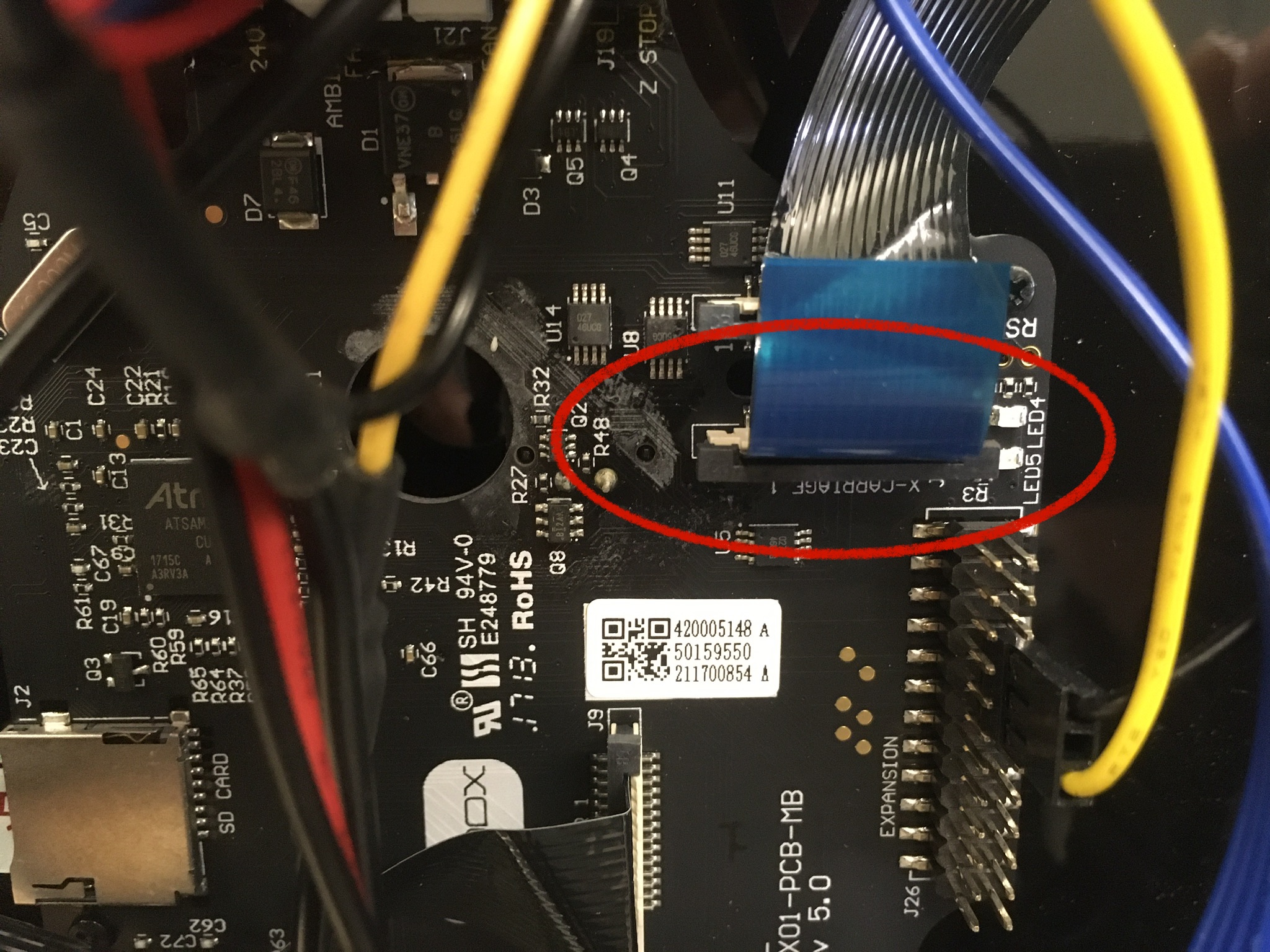 Mark the blue motor cables with a marker with 1 stripe 2, 3, 4 going down for easy positioning later and unfasten.

Unfasten all other connections to the board. 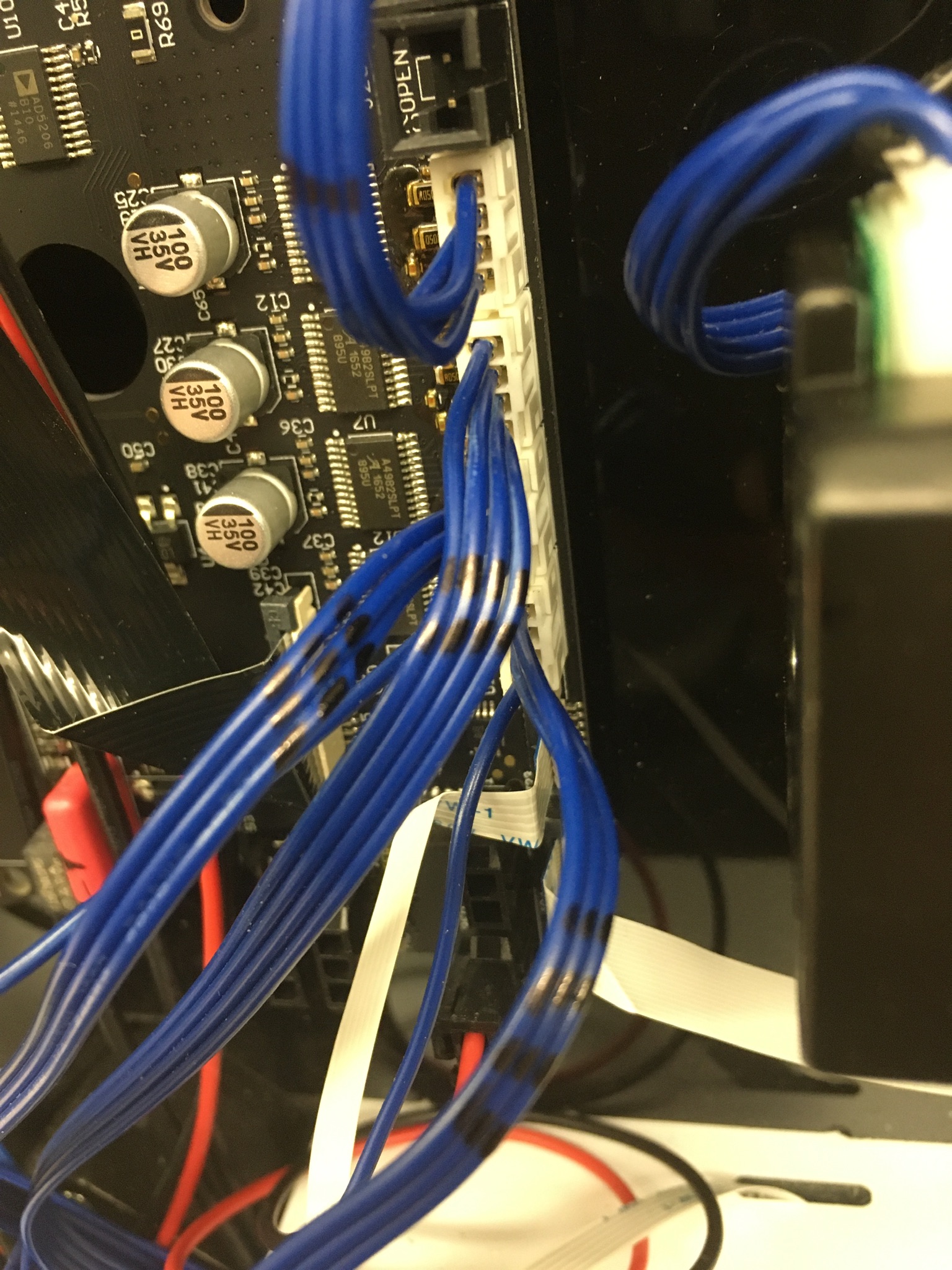 The 2 ribbon cables near the bottom of the board also have the connector with the bar that needs to be released so the cable can be removed. 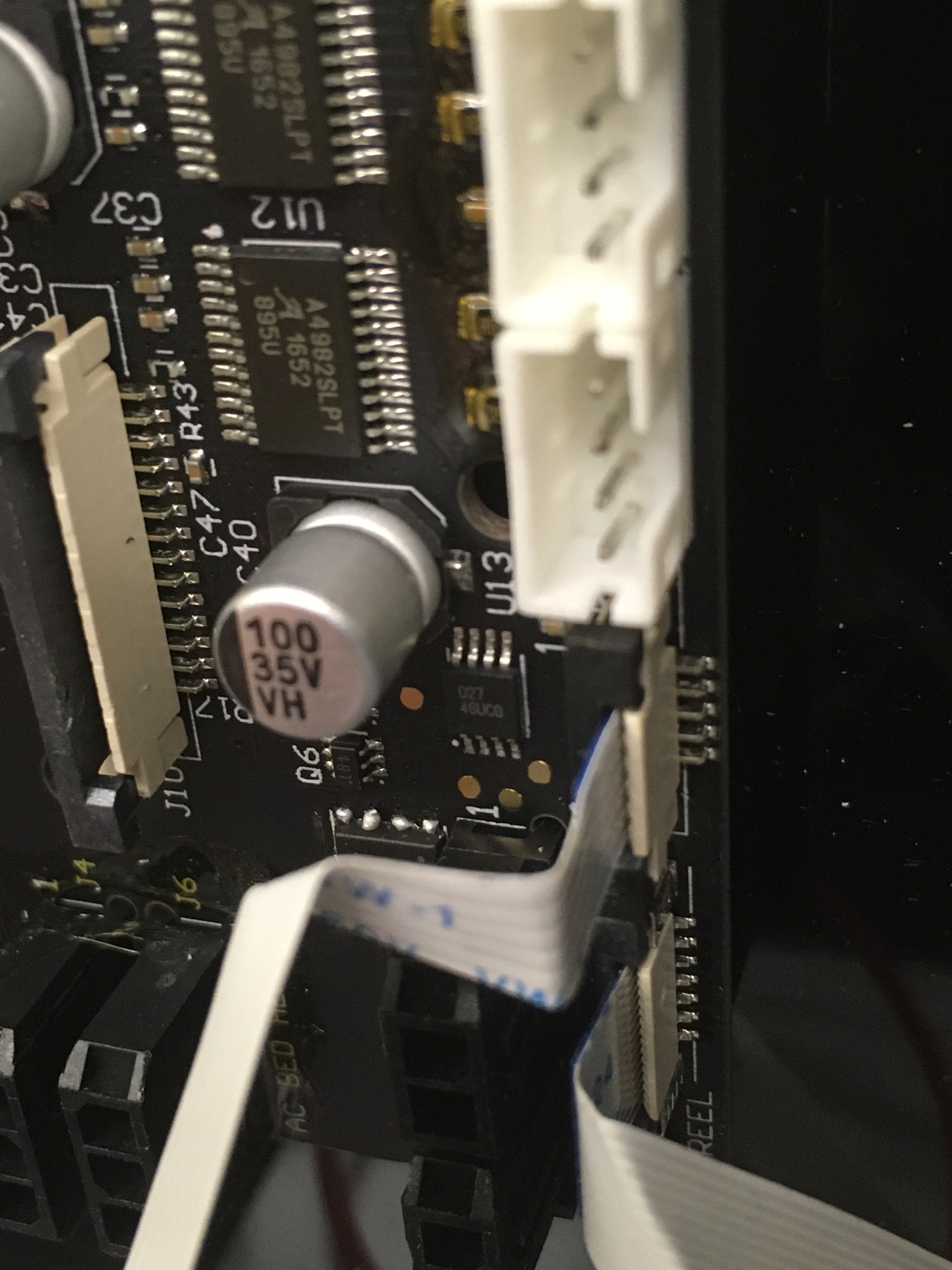 Remove the 4 screws holding the board to the frame. 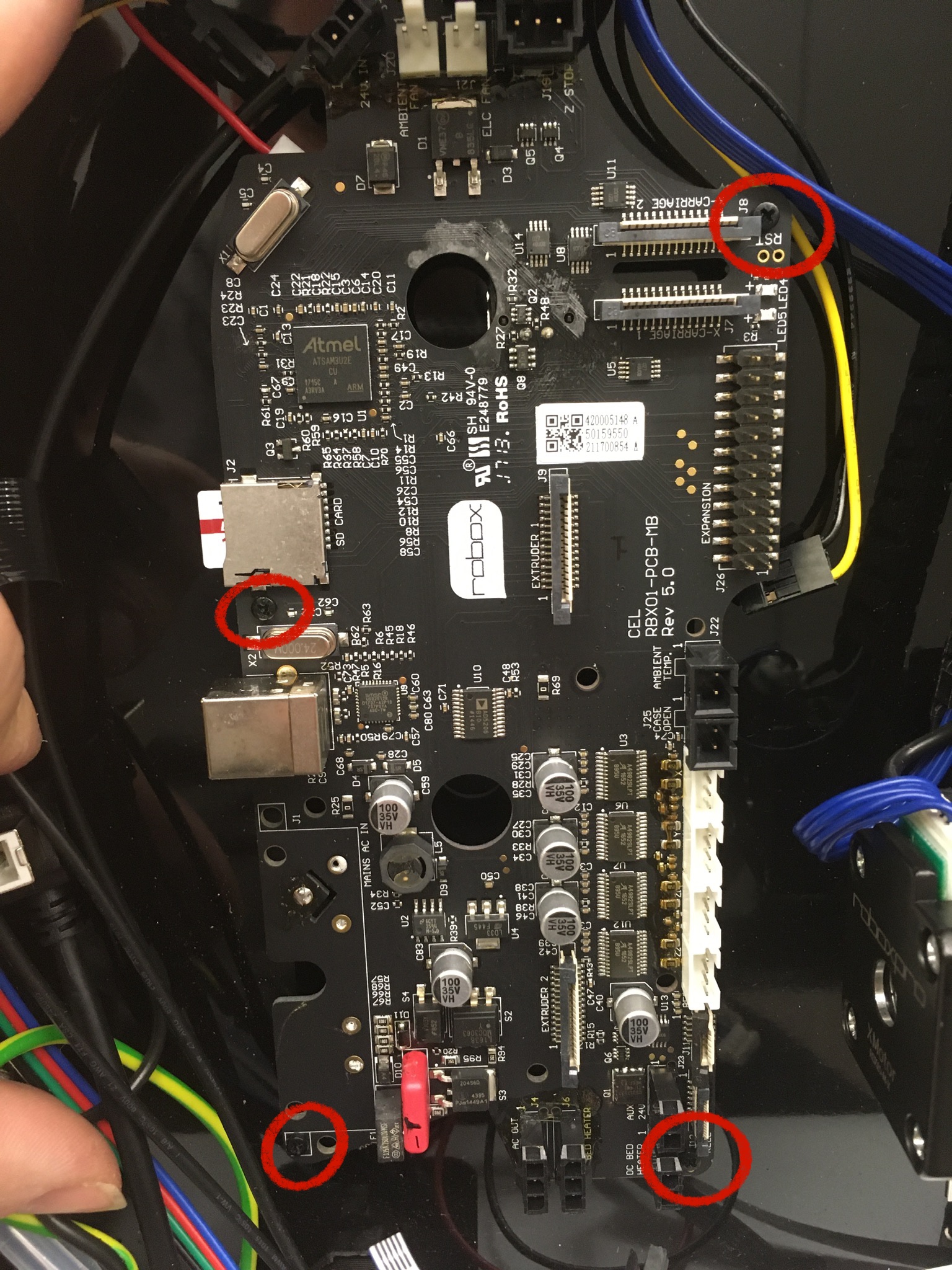 Remove the mainboard making sure to disconnect the final 24v Carriage cable that attaches to the rear of the board. 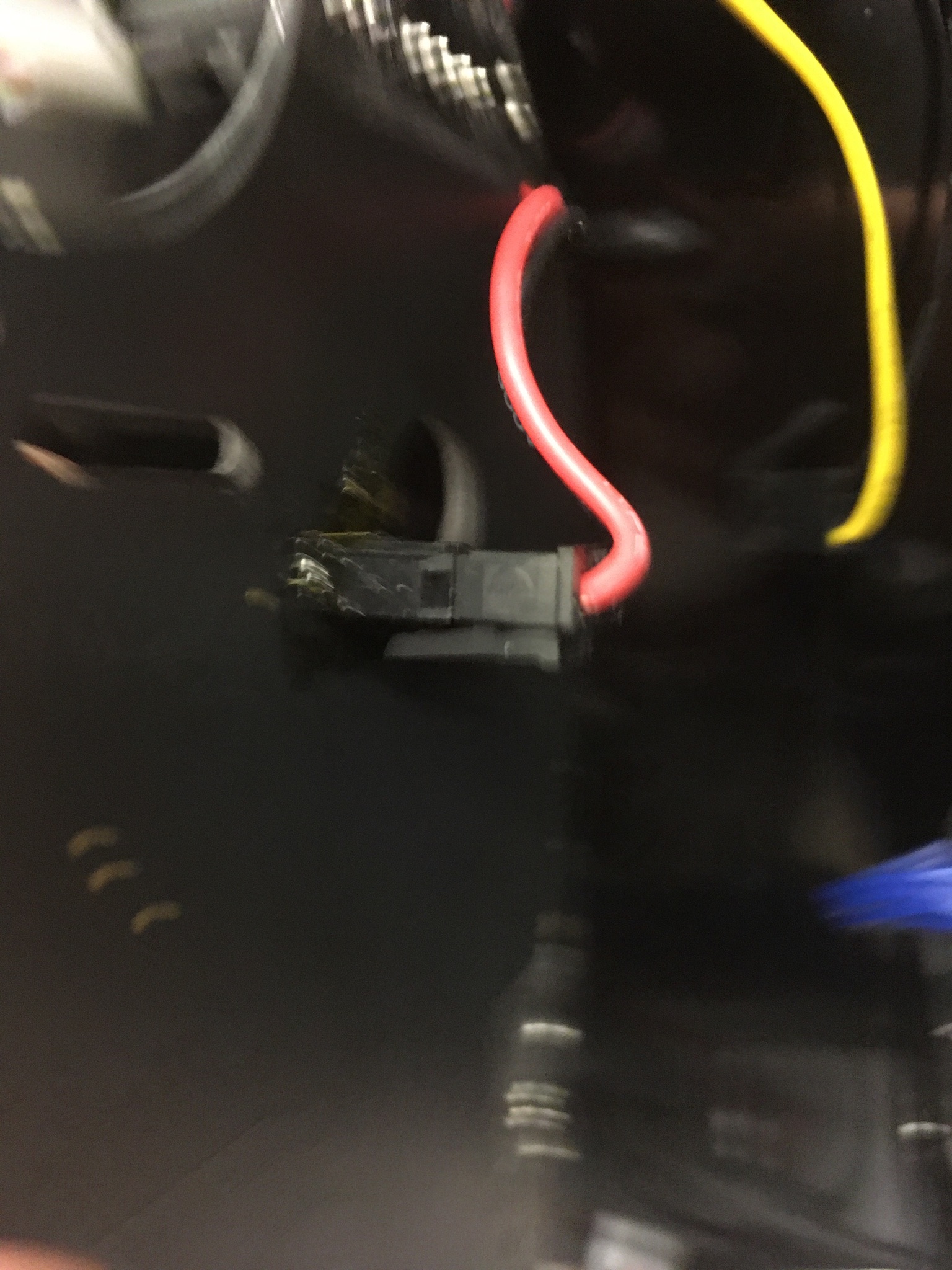 Turn the Roboxpro so you are now looking at the rear of the machine.

Unfasten both bowden tubes from the extruder nozzles by spinning the knurled finger connectors by hand. 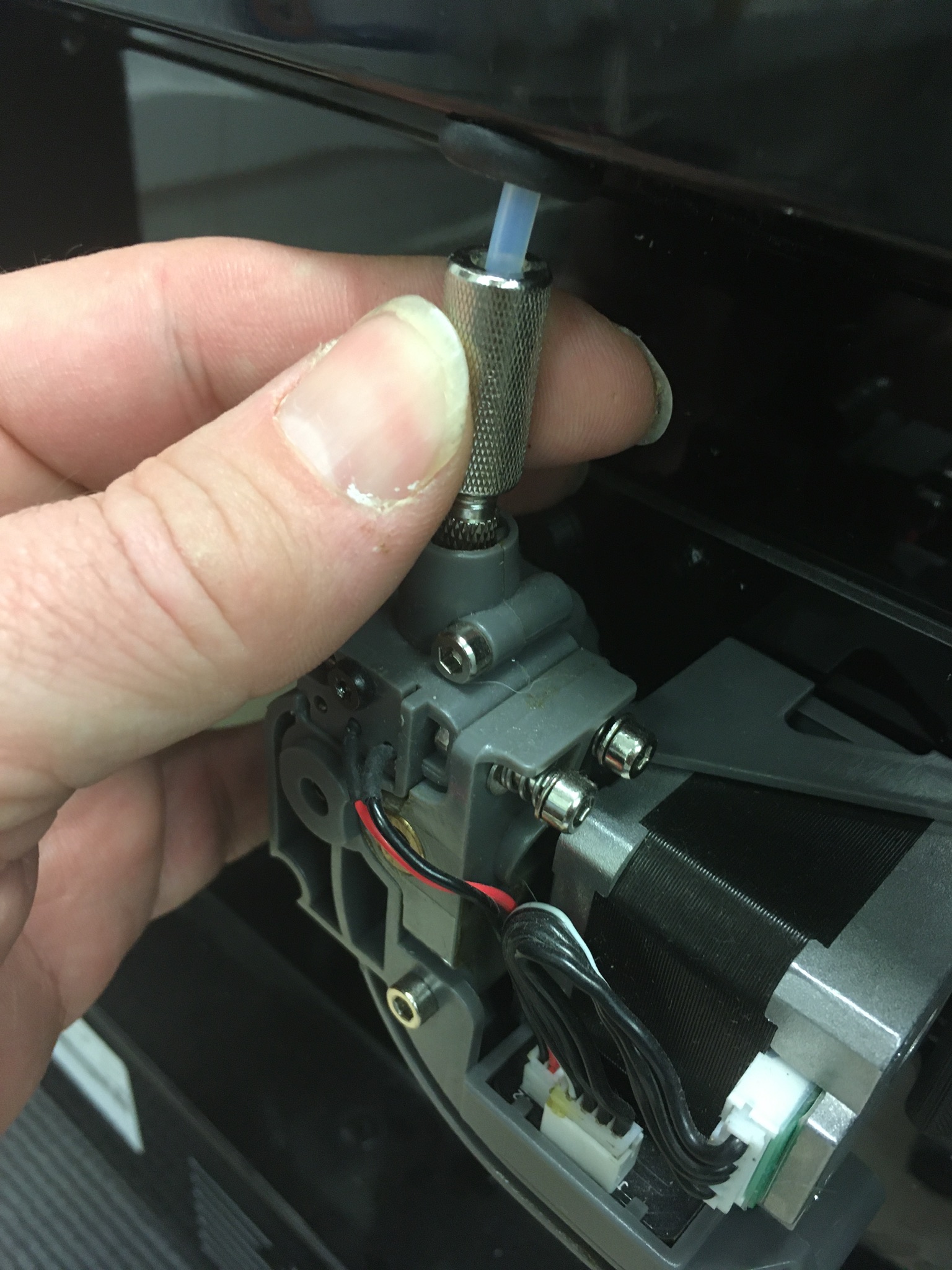 Push down on the adaptor at the end of the larger feed tubes to detach from the extruder. 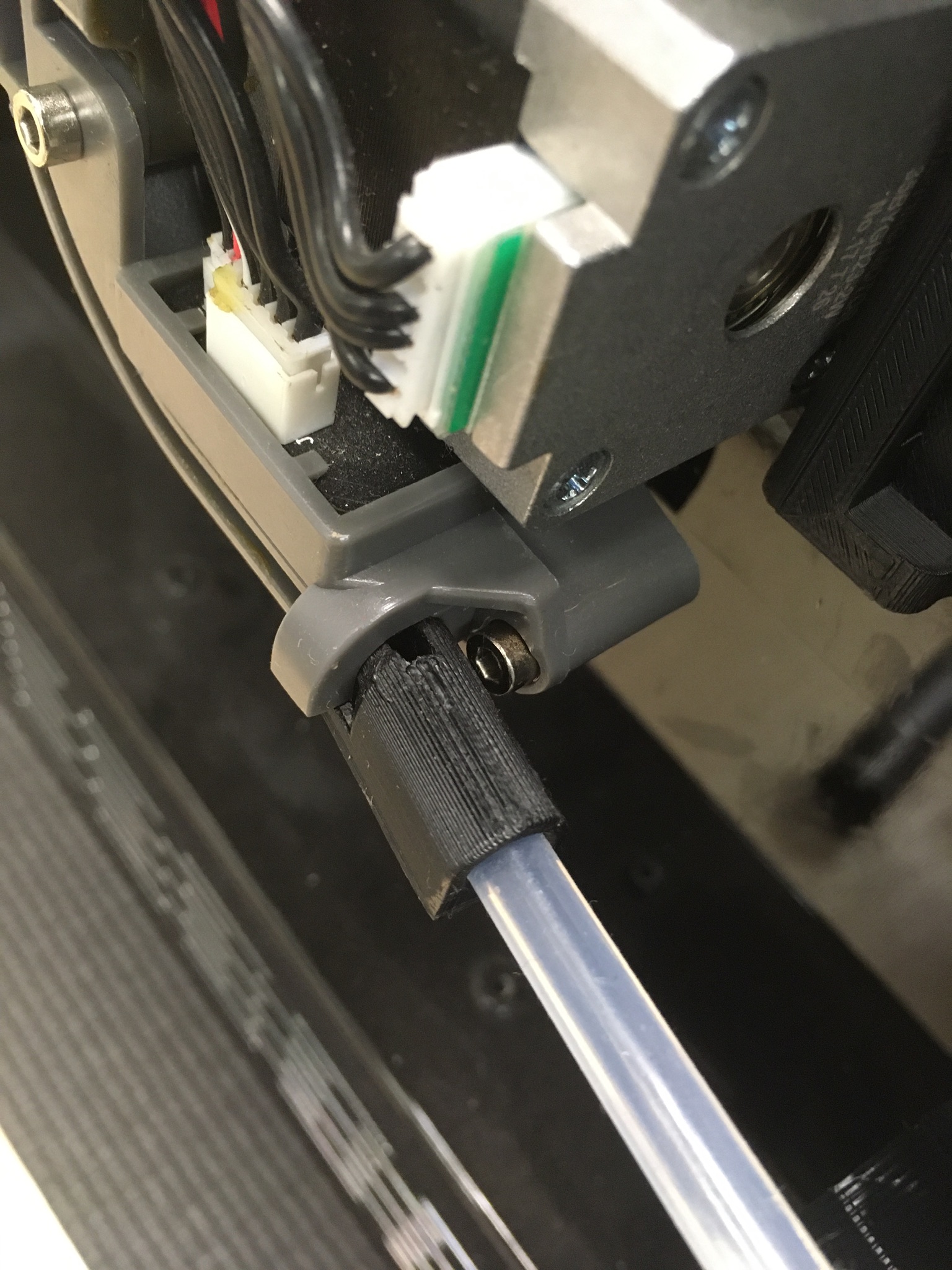 Lift the left extruder until it is free of its mount then disconnect the Extruder Zif cable, This connection may be the same as the connectors on the mainboard or can be a newer pull version, if the connector is all white/cream in colour it is one of the newer versions, simply pull the ribbon cable from the connector if this is the case. 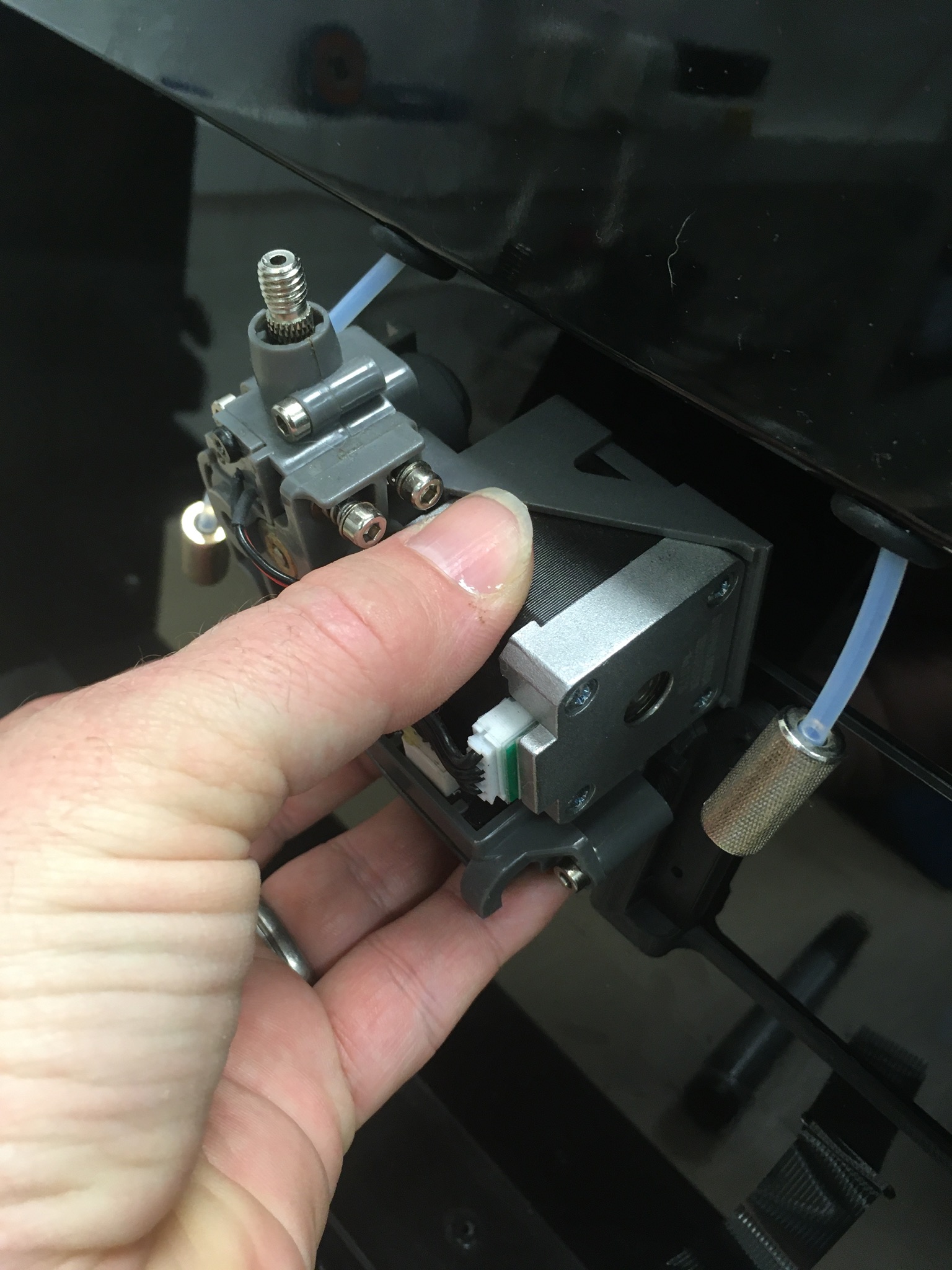 Repeat For the right extruder

Remove the 2 cables going to the extruder PCB.

Remove the 2 Screws holding the motor to the extruder frame.

Drop the motor out of the extruder frame.

There is a pin that goes through the PCB and indexing wheel to keep it secure in the housing, knock this through with a small screwdriver (hammer if needed) There is a piece of plastic on the back of some PCB's that can make it hard to see where the pin is located, peel off or just feel and punch through

Lift the PCB and wheel out as one part.

Sit the indexing wheel into the gap in the gate on the new PCB and insert it into the extruder housing, the wheel sits on a little ledge in the cavity.

Push the pin back through to fix it in place

Insert the motor and fix it in place with the 2 machine screws.

Insert both motor and switch cables into the board.

Insert Zif cable into the connector on the extruder PCB.

Screw the knurled finger connector onto the extruder nozzle.

Fit Thicker feed tubes back to the extruder.

Move the SD card from the old board to the new board. 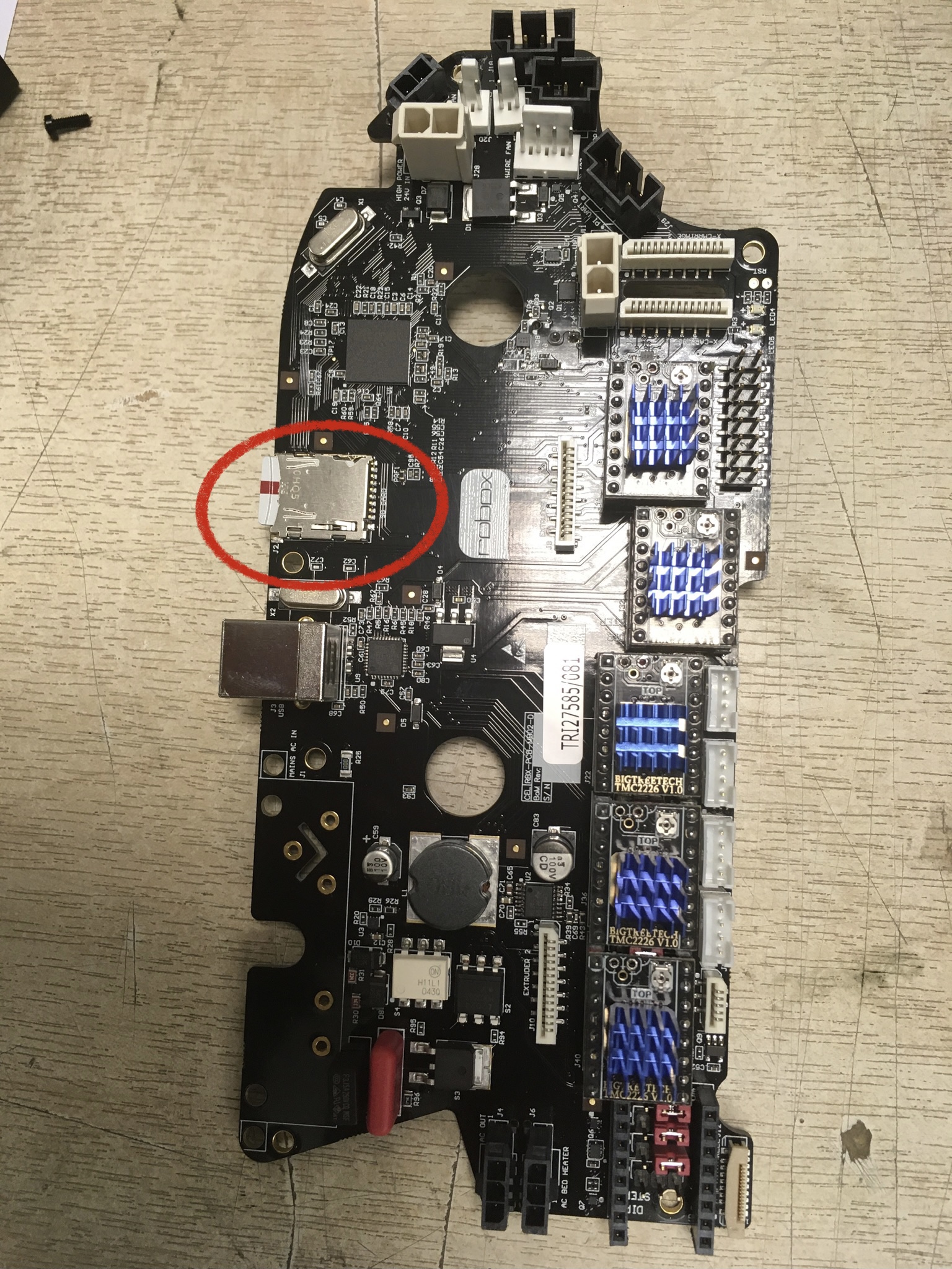 Remove the bottom stepstick from the board 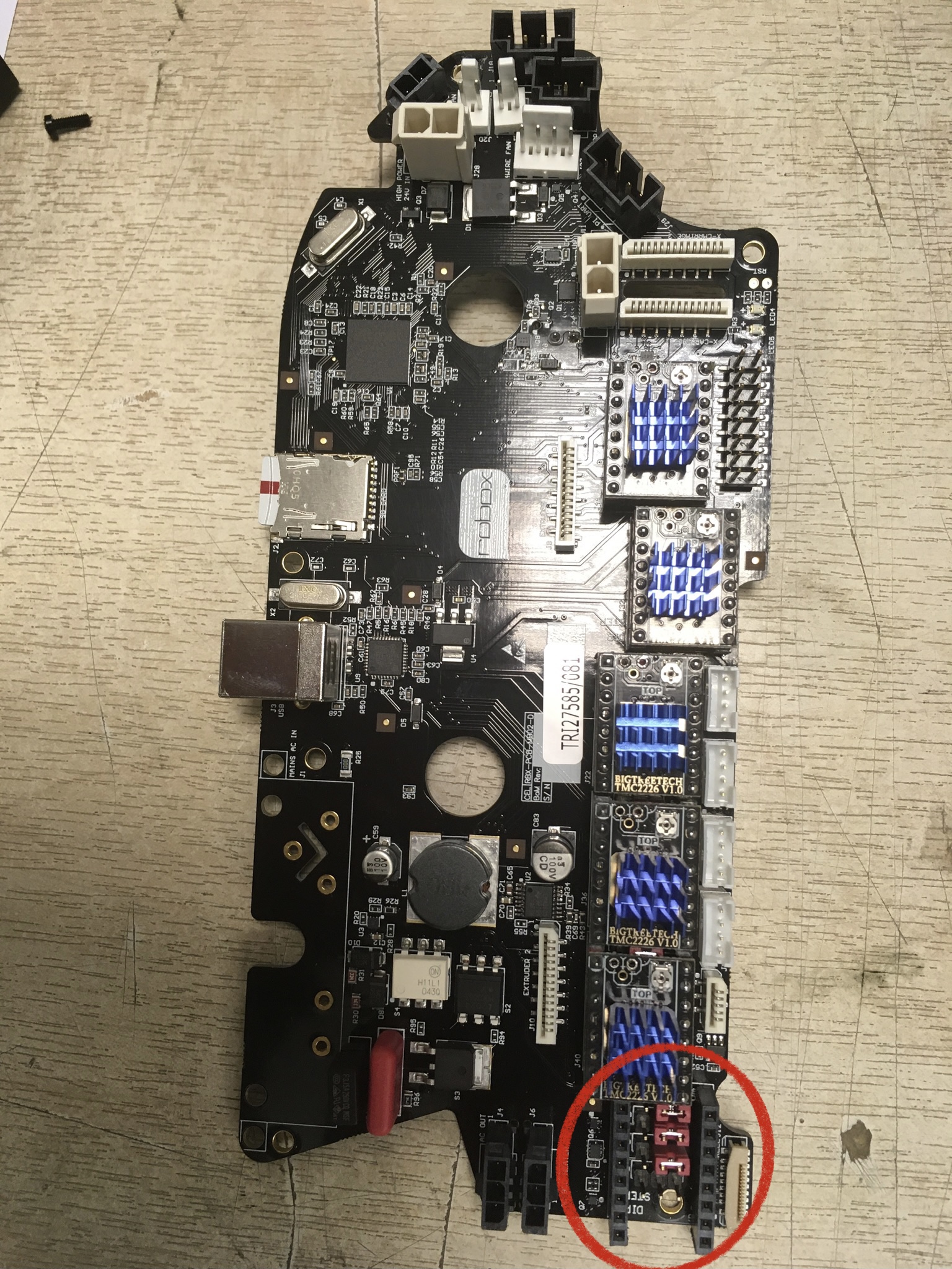 Attach the 2 ribbon cables near the bottom of the board before installing the board into the frame as these can be awkward to reach later.

Attach the 24v carriage cable (Red and black cable coming from the cable chain) into the rear of the new board the clasp of the connector should face the base of the unit to avoid reversing polarity to the carriage. 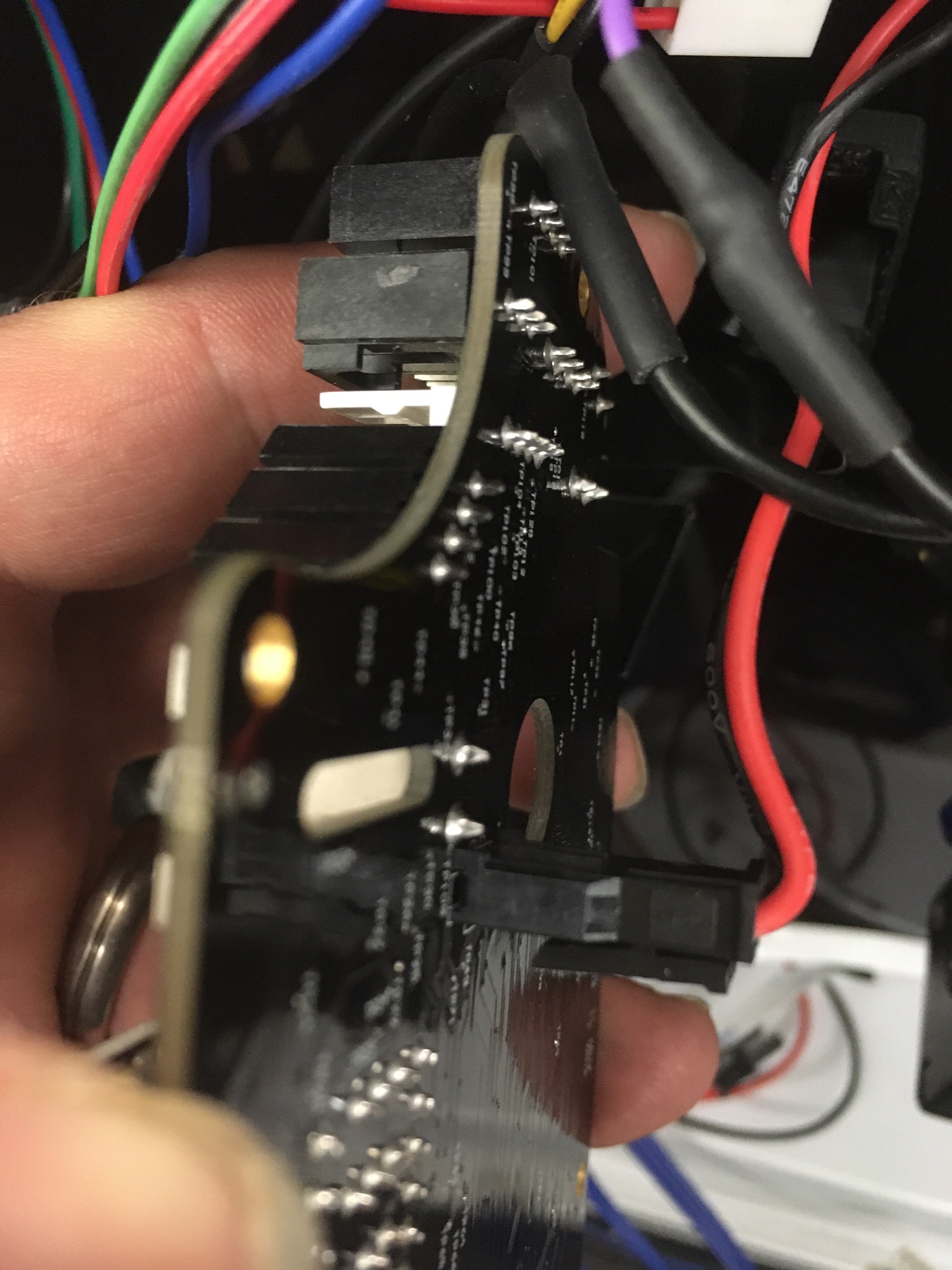 Then offer the board into the unit, the cable you just connected should go through the hole in the frame or sit in the plastic part if one is fitted. Also, thread through the slot the Carriage ZIF cable and fit into the carriage 1 connector

Fix the board to the frame with the 4 plastic screws. 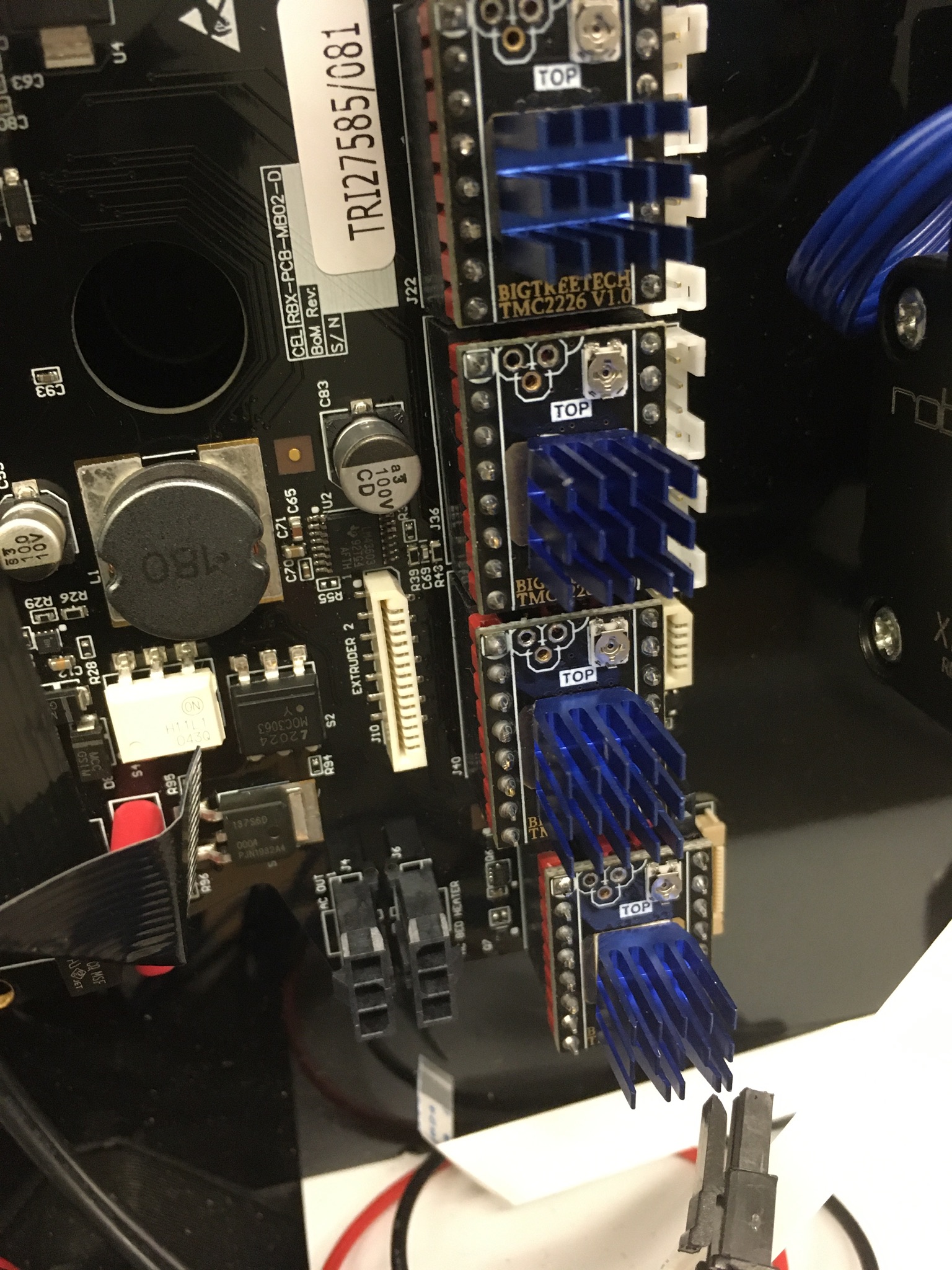 Solder the earth cables to the earth pin (circled) 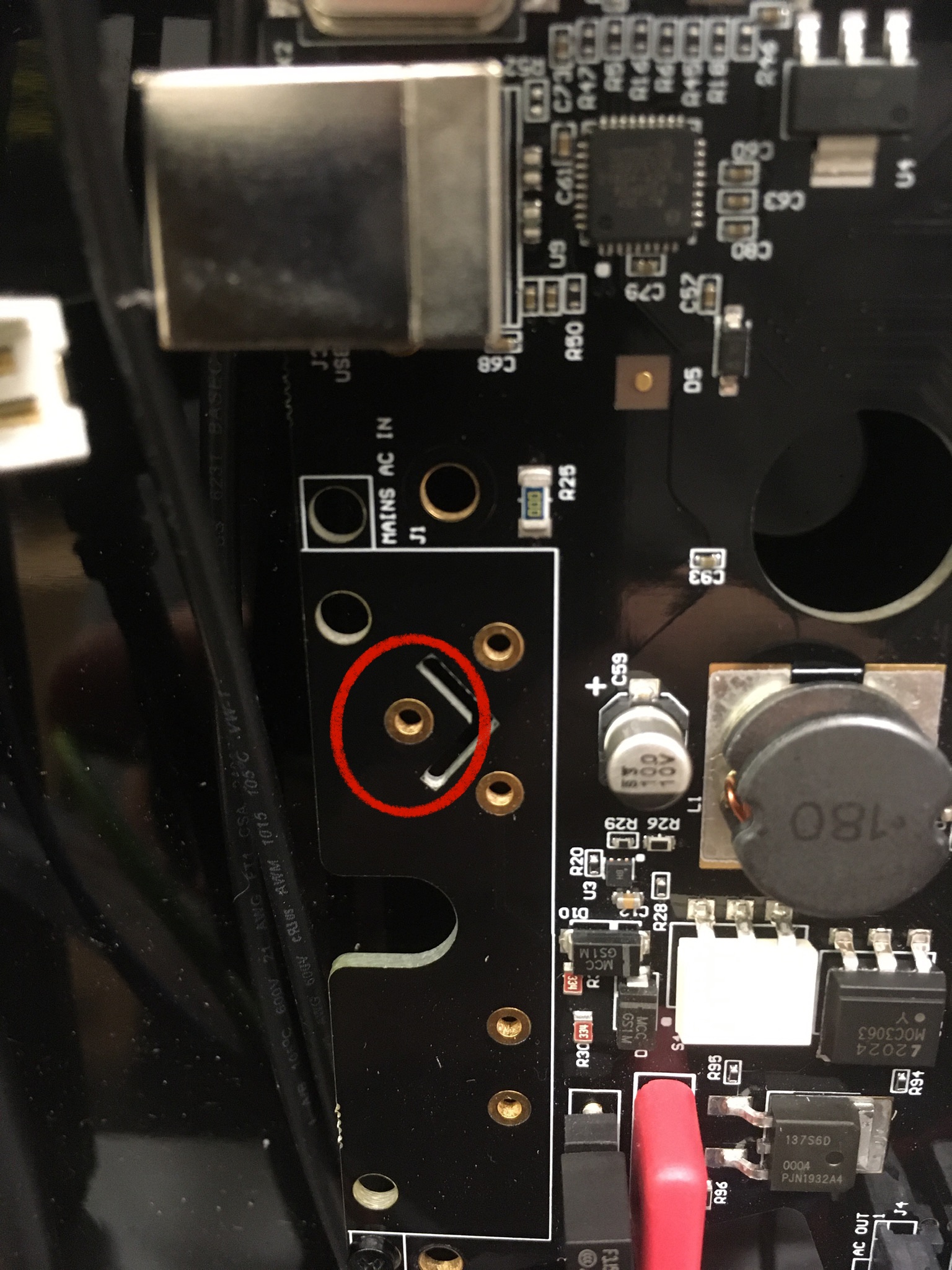 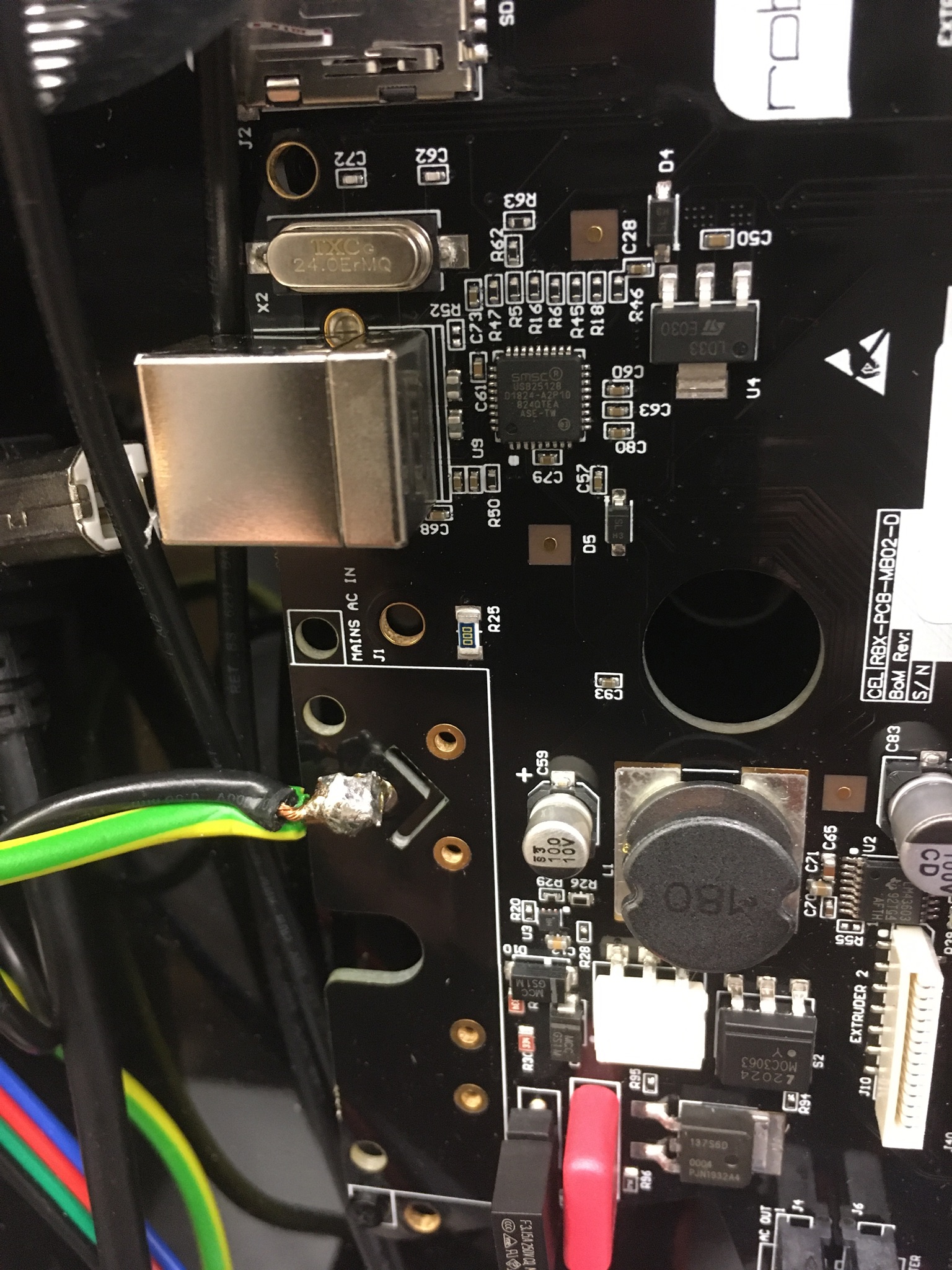 Place a towel on the table and then lie the robox on its clear right side so you can see the underside of the unit. 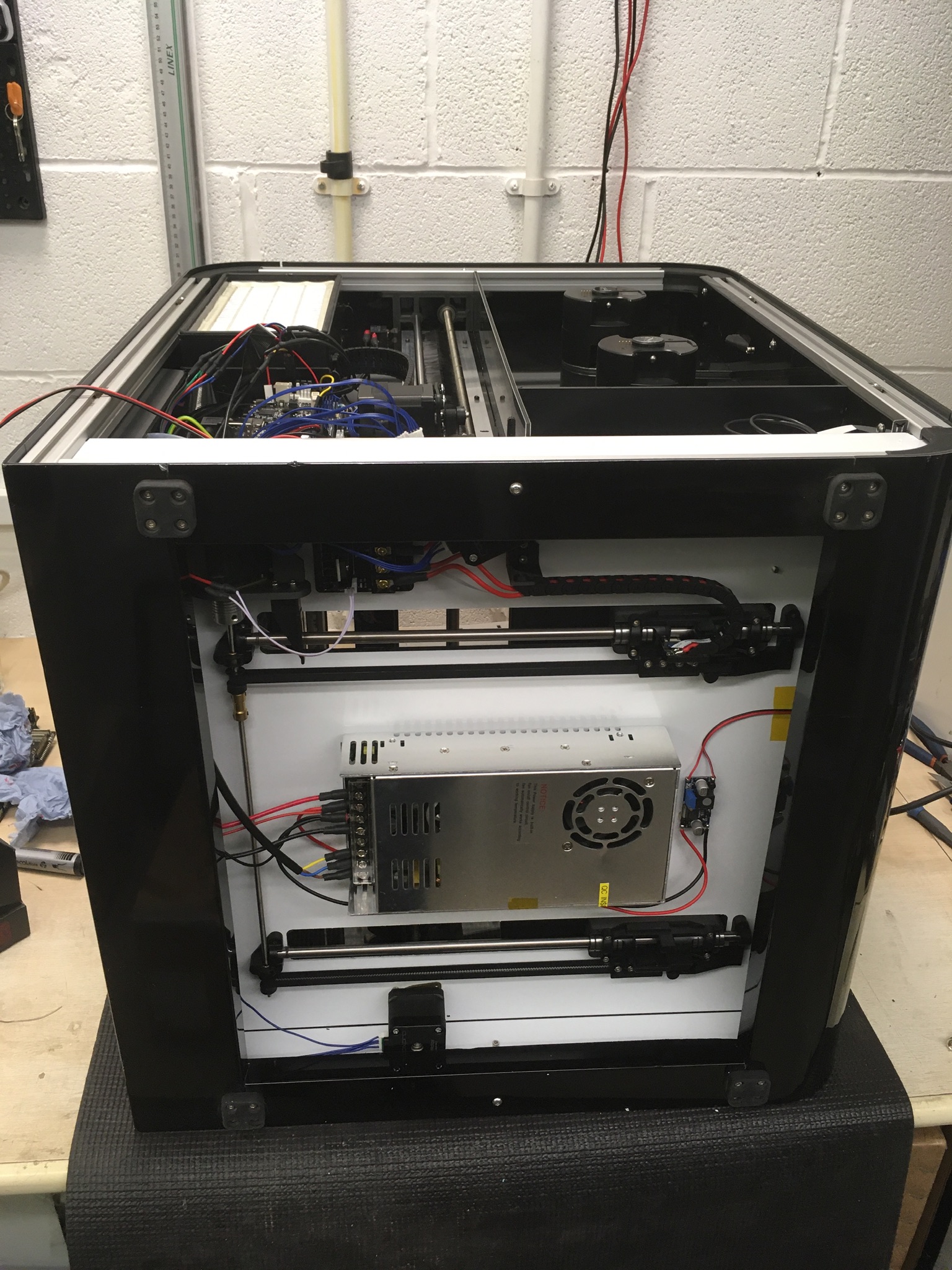 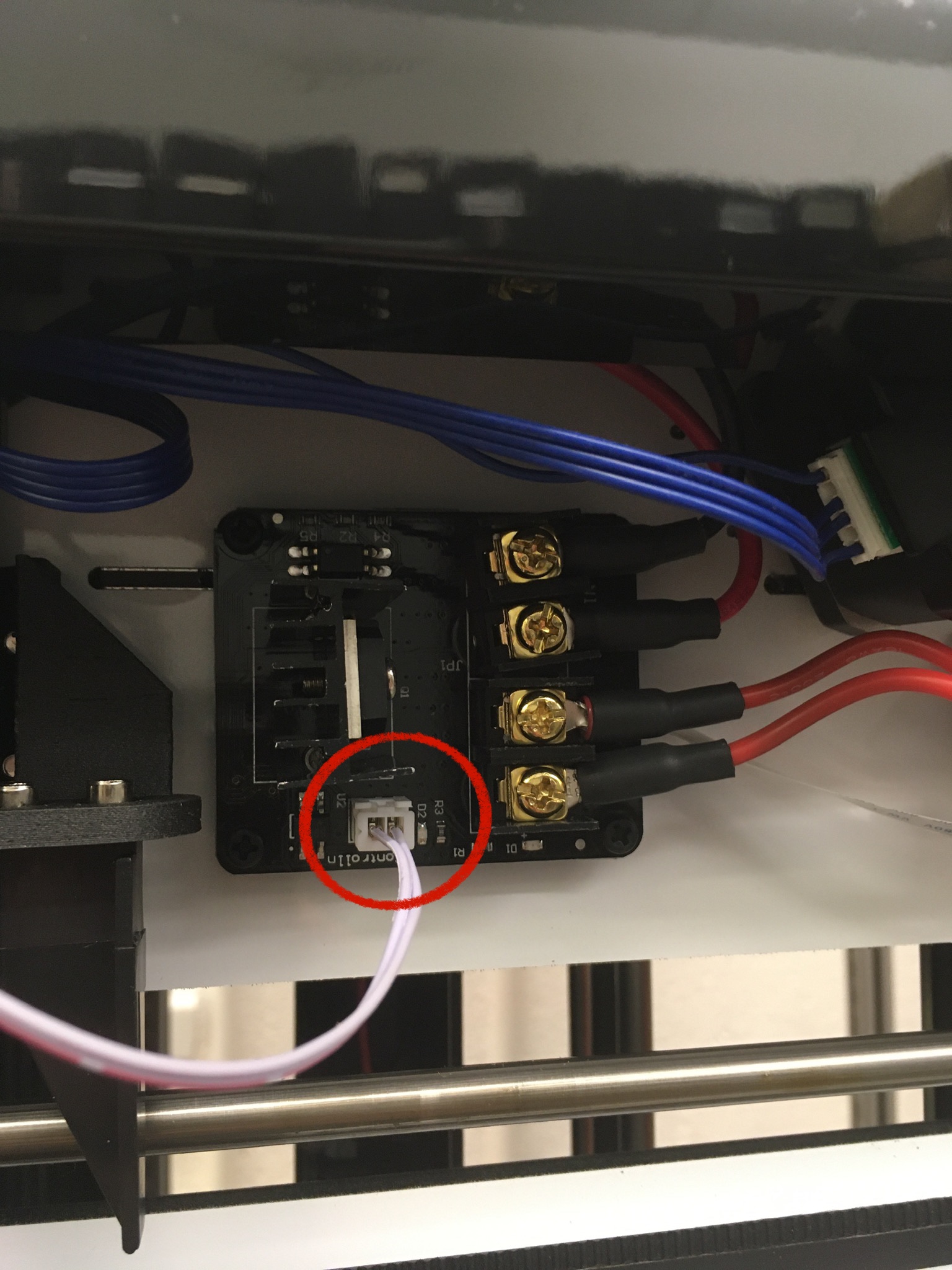 Unscrew both sets of terminals from the bed heater mosfet. Cut the forks free and trim the end of the silicone wire to fit into the electrical connector supplied. Remove the wires going from the power supply to the Bed Heater Mosfet 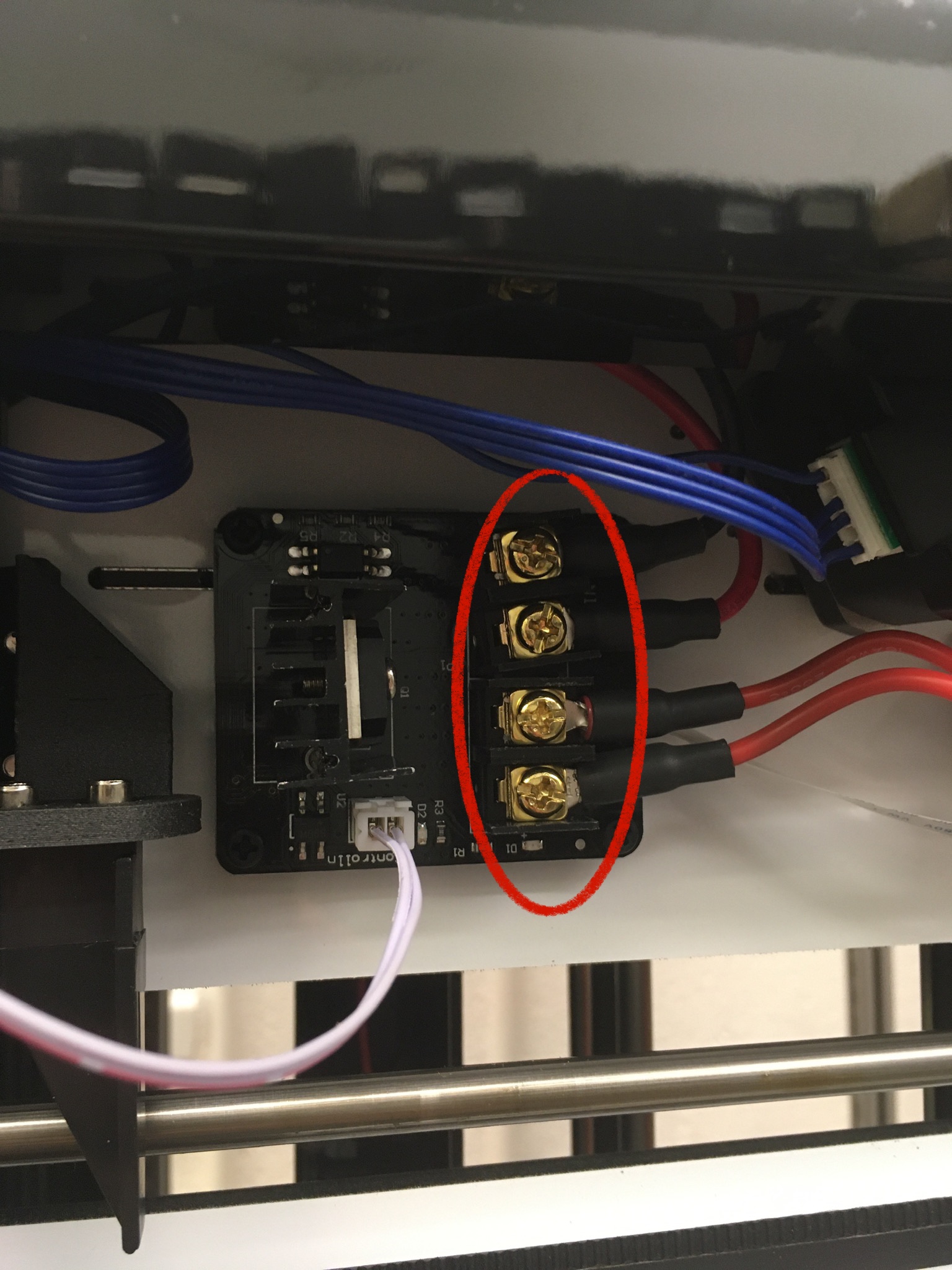 Take the new supplied bed heater cable and run it from the mainboard through the frame and into the other side of the electrical connector, remove the old mosfet by unfastening the four screws holding it in place, the tape can then be removed and the connector stuck to the underside of the frame in its place. 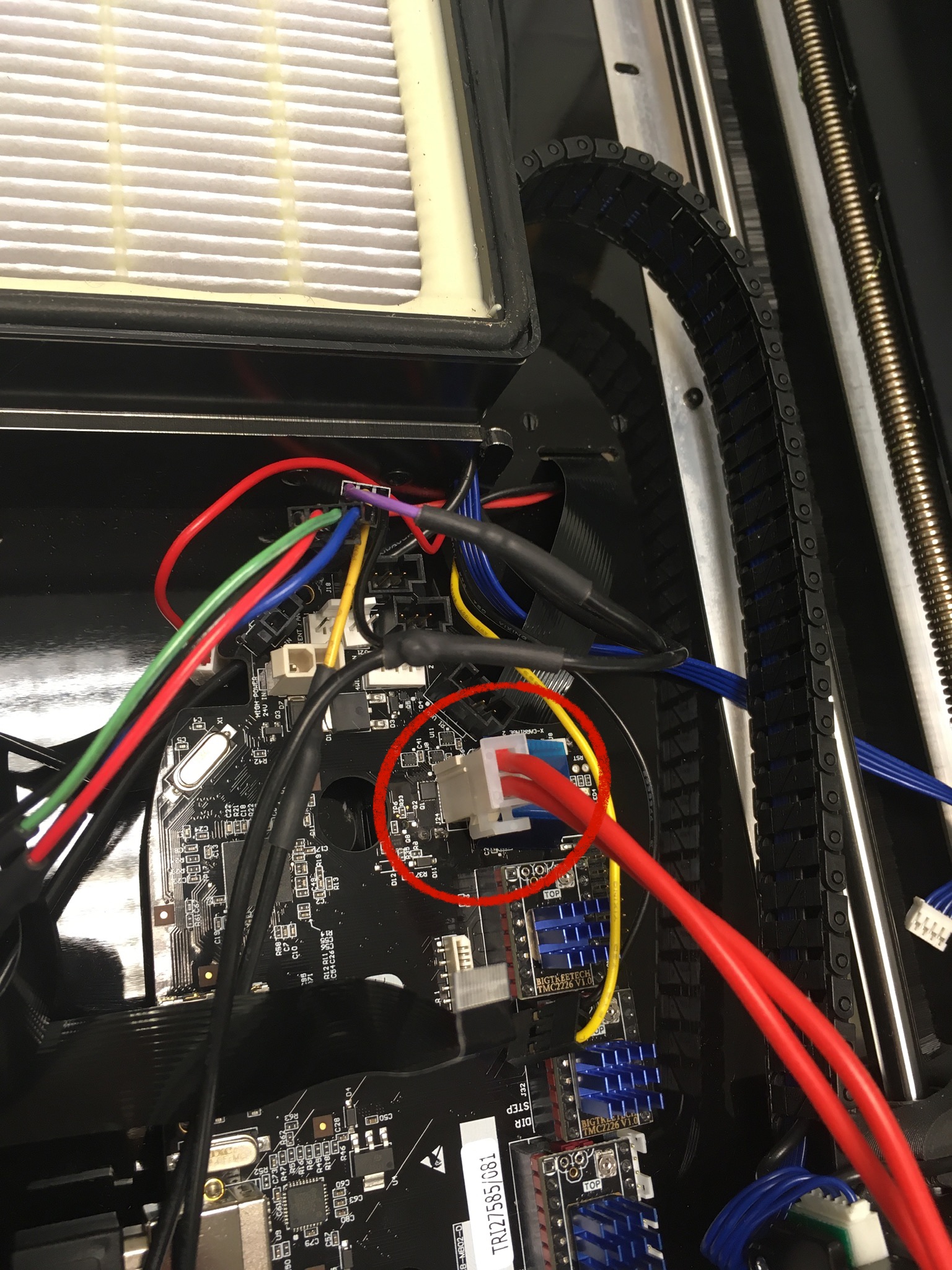 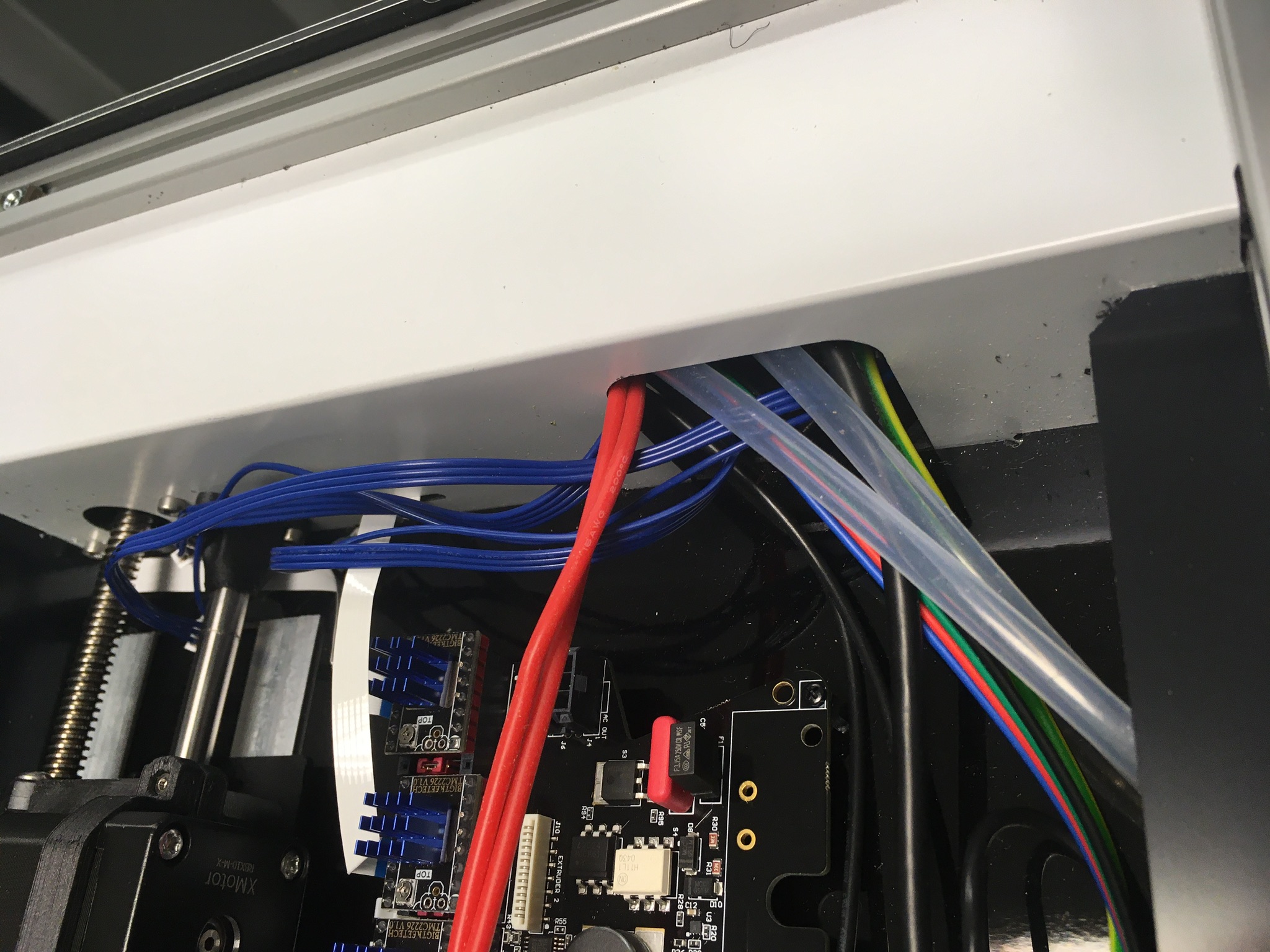 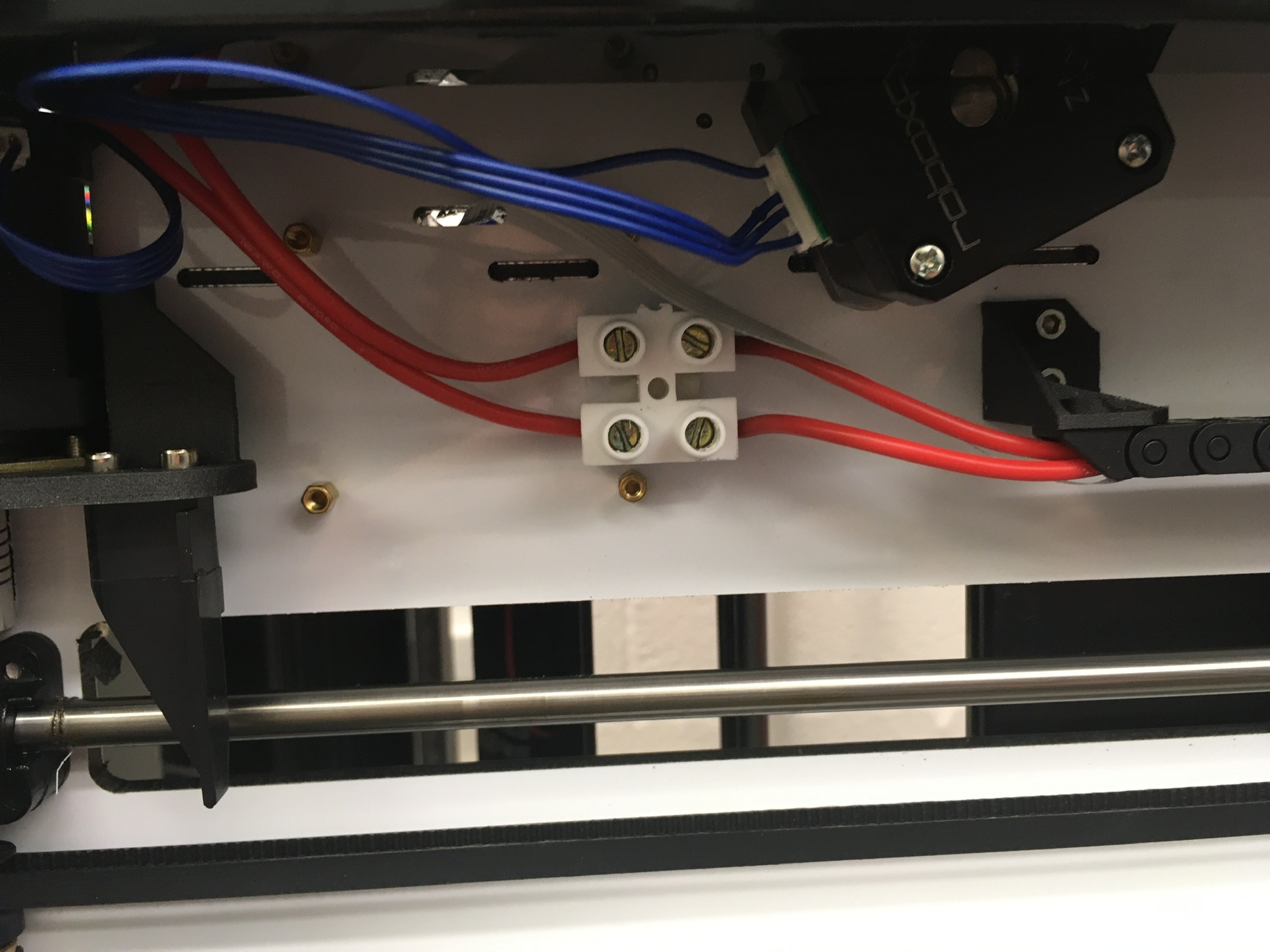 The 24v supply for the mainboard from the power supply has an updated connection, the old connection needs to be unfastened (on some units this is shared with a 24v feed to the Pi power board, if this is the case cut the boards wires free of the Pi wires) Fit the new supplied cable and feed through the frame and plug into the mainboard in the position shown. Make sure you fix the wire to the correct polarity sections on the power supply. 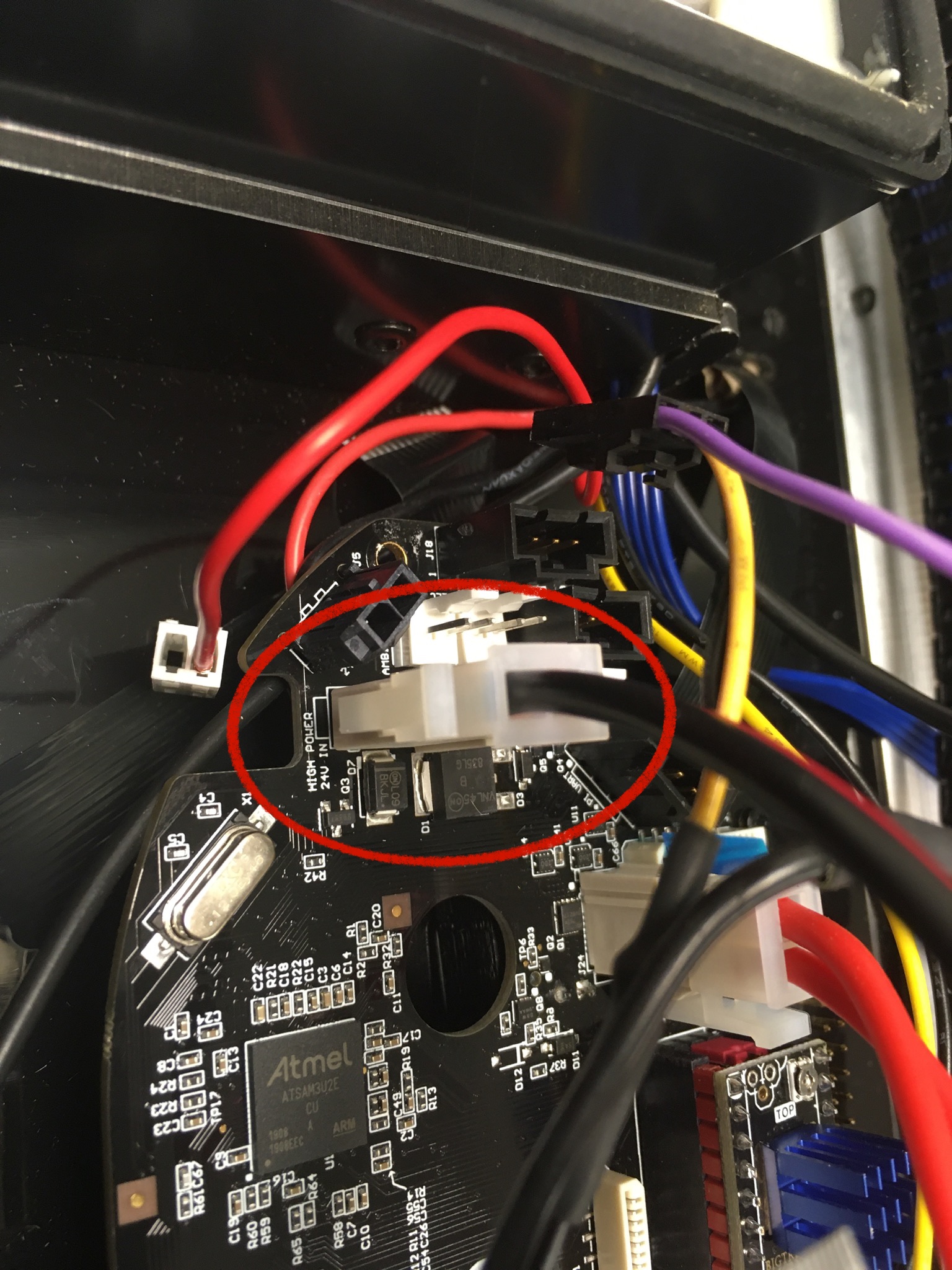 You can now refit the side panel using the 6 screws.

Set the robox in its correct orientation

Plug in the power cable, and the LAN cable if used.

The Robox is now ready for use.

Did you find it helpful? Yes No

Send feedback
Sorry we couldn't be helpful. Help us improve this article with your feedback.